Cardiomyopathy is a heart muscle disease that is estimated to affect tens of thousands of cats each year. It is not unique to Folds. In severe cases, the feline disease is fatal, either immediately or within months. The cats may live for years in mild cases.

There are three forms of cardiomyopathy:

Approximately ninety-five percent of dilated cardiomyopathy in cats has disappeared. In this form of the disease, the heart muscle is destroyed or made biochemically weak, so that it can't contract appropriately and therefore can't pump blood at the normal rate. Dilated cardiomyopathy commonly affects humans, as well. It was discovered that most dilated cardiomyopathy cases were the caused by a nutritional deficiency. The cats lacked taurine in their diets, or if they were receiving taurine, the food made it so their systems couldn't absorb it efficiently. Since manufacturers began adding more taurine to cat foods, dilated cardiomyopathy has all but disappeared in cats.

When a cat has hypertrophic cardiomyopathy (HCM), the left ventricle (the heart's largest pumping chamber) becomes thickened and can't relax properly. Like dilated cardiomyopathy, this form of the disease is also common in humans and is inherited. Researchers found about 75 different mutations that cause the disease in humans. All of these mutations occur on the genes that make the proteins responsible for heart muscle contraction. The heart adds new contraction proteins to compensate for the dysfunctional ones, causing a hypertrophied, or thickened, heart wall. As a result, the heart can contract well, but cannot relax. Normally, the blood rushes in when the heart relaxes, but in hypertrophic cardiomyopathy patients, the blood runs into what seems like a stiff basketball rather than a balloon. The high pressure backs up into the capillaries and forces fluid to seep into the lungs or the chest cavity around the lungs, leading to respiratory problems such as rapid or difficult breathing.

It is equally inherited in male cats and female cats, but males inexplicably usually have a more severe form. The disease can usually be detected using ultrasound by two years of age. Hypertrophic cardiomyopathy becomes full blown in the cat's young adult years. Cats with severe hypertrophic cardiomyopathy develop heart failure and die within months. Some cats with less severe disease, however, can live for long periods.

Currently, scientists are searching for the mutations that cause hypertrophic cardiomyopathy in Maine Coons, American Shorthairs, and British Shorthairs. Hypertrophic cardiomyopathy also occurs in other breeds, including Persians, Birmans, Cornish Rexes, Turkish Vans, and Norwegian Forest Cats, as well as in Domestic Shorthairs. The goal is to devise a genetic test to identify affected cats before they are of breeding age. If all breeders comply with such a test, the disease could be cleared from a breed within one to two generations.

In restrictive cardiomyopathy, the heart's left ventricle looks normal but may not relax correctly, and the left atrium is enlarged. The cause is not known. It may be secondary to a viral infection.

In all forms of cardiomyopathy, blood clots can occur in the enlarged left atrium (the filling chamber behind the left ventricle). When the left atrium is enlarged, blood flow through it slows down, allowing red blood cells to form a clot. The clot often breaks loose and is pushed by the blood flow through the aorta to the back end of the cat's body. If it lodges there, it will cut off the blood supply to the cat's back legs, resulting in paralysis. The latter can become permanent if not treated and no solid treatment plan exists. Submitted by DeLynne Satimore/Mixologies 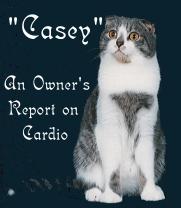 Links to more information on cardiomyopathy: